In 7th grade guidance classes, students are discussing resiliency and how to respond to adversity. Students were asked to create their Mount Rushmore of the most successful American Presidents. Approximately, 98% of students listed Abraham Lincoln as being a President they viewed as highly successful. I pointed out to students that Abraham Lincoln was a big FAILURE until the age of 51.

For reference here are a list of his major failures
1831: Failed in business.
1832: Ran for state legislature – lost.
1832: Also lost his job – wanted to go to law school but couldn’t get in.
1833: Borrowed some money from a friend to begin a business and by the end of the year he was bankrupt. He spent the next 17 years of his life paying off this debt.
1834: Ran for state legislature again – won.
1836: Had a total nervous breakdown and was in bed for six months.
1838: Sought to become speaker of the state legislature – defeated.
1840: Sought to become elector – defeated.
1843: Ran for Congress – lost.
1846: Ran for Congress again – this time he won – went to Washington and did a good job.
1848: Ran for re-election to Congress – lost.
1849 Sought the job of land officer in his home state – rejected.
1854: Ran for Senate of the United States – lost.
1856: Sought the Vice-Presidential nomination at his party’s national convention – got less than 100 votes.
1858: Ran for U.S. Senate again – again he lost.
It was not until 1860 that he was elected President and became one of the great American Presidents.

Students discussed how previous adversity made them stronger. Students gave examples such as not making a sports team or doing poorly on a test. They said it was important that they reflected on their mistakes and worked to make improvements. The final piece was taking the word FAILURE and turning it into something positive by creating acrostic poems. Please see two examples in the pictures. Mr. Vaughn will tell you that avoiding failure is never good. If we aren't making mistakes we are not learning. Ask your students how they failed today. How did the adversity feel and what did they learn from it? 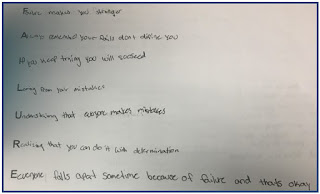 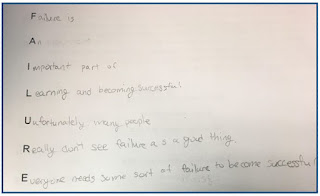 Posted by Medfield Guidance Department at 6:26 AM

Link to our Webpages!