“Let them drive the process….” 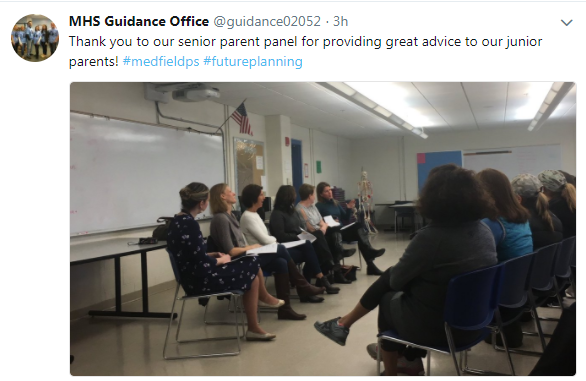 
In early April the MHS Guidance office invited junior parents to hear from a panel of five senior parents as they shared thoughts on the future planning process. After two future planning events, two visits to classrooms and an upcoming college fair it was time for the guidance counselors to step aside, stop talking and let the parents in the trenches shares some insights, anecdotes and trade secrets.

We had a nice mix of “landing” spots. Two of the parents had kids committed to Providence College, two more were on the fence, one with Villanova and one with Temple and a final speaker’s child was going to decide between Loyola, Maryland or High Point University. The event was moderated by third-year guidance counselor, Kathy Mahoney.

Guidance department head, Stephanie Worthley kicked things off by welcoming the crowd of about forty and quickly turned things over to the panel.

Some general takeaways:
That last takeaway was a common thread that tied the entire morning together. As parents of seniors began the process they were intent on guiding their child and not becoming an overbearing presence amid the challenging timeframe of future planning with it’s written and unwritten deadlines.

One parent shared how their family began the process. The student was asked to come up with twenty schools based on interest. That list was then whittled down after a few visits and further research. She went on to explain that as a junior her son “THOUGHT” he wanted to go far from home, but as the sense of urgency became more real and vivid, he tended to look at schools closer to home.

At the end of the day is was clear to the audience that these five parents were not looking to relive a visceral experience through their children. A sense of individual pride permeated the discussion. And that pride wasn’t based on competitiveness or winning any specific brass ring. The pride was based on the fact that each parent knew their child had great options ahead of them.

And the driving force behind that? They let their child drive the process.
Posted by Medfield Guidance Department at 11:38 AM

Link to our Webpages!